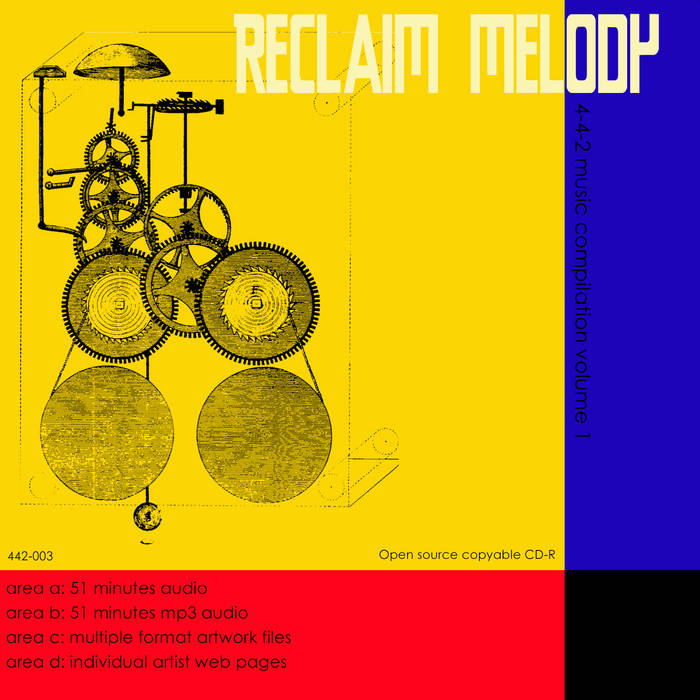 'Reclaim Melody' was the first compilation put together by 4-4-2 Music and was, indeed, the first conscious release by the label (the earlier Telafonica 'Dos' double EP was attributed to Furniture Club Music - the name set up by Telafonica to release their own music, which quickly evolved into the much wider reaching 4-4-2 Music). In the days before such platforms as Bandcamp, the compilation was an early attempt to make a release which could be passed around for free, copied etc. All the artists gave their permission for this freedom of dissemination and the release was also put up for free download on the early netlabel hub, archive.org (limited to mp3 only). As well as the music, the artwork was also available for free so you could print up your own CD packaging (in the days when CD burning was ubiquitous and the CD format still ruled the kingdom). For these historical reasons, these extras are included here, even though folks rarely create their own CDs any more.

There was also an internal website on the disc, but since most of the links on that no longer exist, it's fairly redundant now so it's not being put up. :)

In his fairly remarkable Beatle book, ‘Revolution In The Head’, Ian MacDonald bases one essay around a point summed up in the line, “...in terms of form, pop has almost come to a halt, displaying few originalities in structure, metre or melody...”, compared with its 60s heyday. Now, I am a bigger Beatles fan than most, but this bothers me. This view ultimately contradicts itself. The praise given to the Beatles is fairly universally based on their ability to push boundaries and take pop music to new places. By the end of the 60s, they were still writing amazing melodies (and even did so as solo artists) but were sonically burnt out. MacDonald’s criticism is based on a single criteria, that music be judged on its melodic surprise. It denies the right of any other sort of development in music. Indeed, in the book, he writes off such great tracks as ‘Baby You’re A Rich Man’ and ‘I Want You (She’s So Heavy)’ as merely ‘feel’ music which is ultimately disposable, because they have simple, repetitive melodies and musical backing. He denies music the opportunity to explore other structural and emotive elements and, indeed, limits the role of melody to that of merely surprising the listener. The music on this compilation is, in many ways, a demonstration of the wider use of melody, particularly in contemporary, electronic based music. For me, melody is the part of a piece of music that you remember the next day. The bit you unconsciously hum a week after hearing it. The music on this disc uses melody, but not at the expense of other musical functions. While baby boomers might choose not to recognise it, creativity did not end with the demise of the Beatles, and melodies are found in many other places.

Executive producer/artwork : Adrian Elmer
Please copy this album and pass it on to a friend.

Sampa The Great joins the show to discuss her release, "As Above, So Below".